What a special evening Crime Stoppers and our supporters enjoyed with our special guest, Lt. Colonel Oliver North last night.

You could not have had a more patriotic, inspiring and blessed speaker come to Shreveport/Bossier to bring his warrior experiences with our troops, what it means to be an American and taking the fight to our enemies on their soil before they come to ours. Col. North blessed the crowd with pictures of our troops as they fight the good fight on our behalf and praised our "first responders" for taking the fight to our streets on behalf of our citizens who they are sworn to protect.

The resounding theme throughout the presentation was, "We the People" are the voice in Washington, "We the People" are the force to combat radical Islam, and "We the People" are the catalyst to take back our streets against those who choose to live the life of crime and would like nothing more than to keep us prisoners in our homes and create chaos in our society. His message to all in attendance, Crime Stoppers equals "situational awareness", a tactic taught and practiced by our military and first responders in their daily responsibilities.

Col. North also reminded us, even grounded us regarding the use of the word hero too frequently by saying, "A hero, is not someone who catches a pass in the end zone at LSU just before the whistle blows. A hero is not someone who wears spandex and a cape. A hero by classical definition--is a person who puts them-self at risk for the benefit of others. There were heroes in abundance on 9/11. First responders rushed into those buildings trying to save the lives of others."

Yes, a finer night could not have been experienced anywhere in the Ark-La-Tex than Friday, September 11th at Sam’s Town, to be in the presence of a true patriot of Col. North's caliber. A great American visited us on 9/11 and those who missed it, missed hearing a message of resilience and resolution, of promise and patriotism. An evening not soon to be forgotten by so many.

God Bless our military and first responders for their extreme sacrifice, dedication and professionalism. 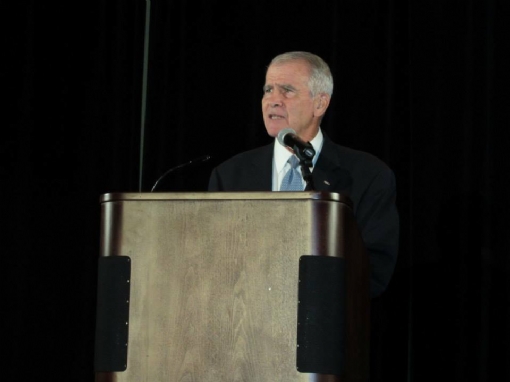